A French horn can produce a thrilling clarion call that cuts through an orchestral crescendo and provides warm, soft support behind the flutes and clarinets. Mastering the French horn requires a great deal of practice and impeccable embouchure and breathing technique.

It also requires a French horn, and that’s where we come in. If you’re looking for a new instrument or your first French horn, we’ve compiled a list of horns for players at every ability level.

Bottom line up front: The Conn 8D CONNstellation will be the best horn choice for most musicians. While every French horn on this list can make beautiful music, the Conn 8D is a horn that will serve well for hornists at all levels.

Beginners who start their musical journey with a Conn 8D have an instrument they can play throughout their musical career, even if that career leads them to an orchestra pit or a studio gig.

How I Chose the Best French Horns

When I was compiling this list of the best French horns, here are some of the factors I considered for each instrument: While it is generally a good idea to get the best horn you can afford. A beginner will do better purchasing a reliable student instrument and using the money they save on lessons.

There’s no easy way around it: French horns are expensive. While you can get cheap Chinese horns on Amazon or at other online outlets, they typically have serious intonation and quality control issues at best and are unplayable at worst.

Instead of looking for the least expensive horns, I searched for horns that offer the best price-to-value ratio. You can find cheaper and more expensive horns than those on this list. I felt my selections give musicians the best bang for their buck.

If your no-name instrument from an anonymous vendor is unsatisfactory, you have little recourse, and the money you spent has been wasted. I looked for instrument makers with a track record and a positive reputation for quality control and customer service.

These French horns may cost more, but they will provide you with better sound, better playability, and a higher resale value should you decide to upgrade or switch instruments.

A Brief History of the French Horn 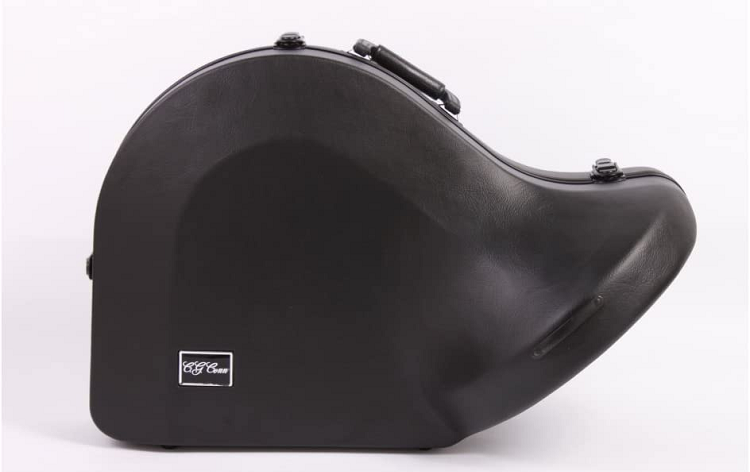 For a very long time, musicians used natural horns without valves or any other means of changing pitch. A natural horn can play a harmonic series based on the length of its tubing.

To play music in a different key, hornists needed to travel with multiple horns or use crooks to extend the length of their natural horn.

In 1818 Heinrich Stölzel and Friedrich Blümel introduced a more convenient way of changing keys. Their new horn used rotary valves that opened and closed lengths of tubing to alter the pitch. There was some skepticism among horn players at first.

They felt the new instruments were heavier, harder to blow through, and offered an inferior tone to the natural horn. But the new valved horns could play a complete chromatic scale, something no natural horn could do. Soon, orchestras and ensembles adopted the valved horn.

In 1900 Fritz Kruspe created a double F/B♭ horn with a valve that could raise the horn’s pitch by a fifth, making it easier to play challenging passages in the high range. This double horn design has become the standard for French horns, although single and triple horns are available.

A few famous horn players include:

The Best French Horns For Your Money

Thanks to its reasonably-priced and reliable instruments, British/Chinese instrument maker Wessex has become a significant player in the musical world.

At a bit under $1,300, the FH601 is not a cheap instrument. But with the FH601, you can be sure that any problems with your playing stem from shortcomings in your technique, not your horn.

The FH601 is a serviceable student instrument and one that will serve you well as a second instrument or as a backup horn. It has mechanical valves, which are noisier than string valves but easier to maintain.

(And unless you’re playing a very soft passage in a tiny room, your audience won’t hear the valves clicking anyway). Professionals might want a more advanced instrument, but this may be the last horn you ever need for beginners and casual horn players. Marching French horns (also called mellophones) look like trumpets or cornets. Their front-facing bells are intended for marching and playing outdoors, where the backward-facing French horn bell would not be able to project sound forward.

Among the world’s largest makers of marching instruments, Yamaha gives us the YHR-302M, a French horn suited for stadiums.

Because marching lines typically call on the horn’s higher registers, the YHR-302M is keyed in B♭, a full fifth above the usual F. The marching French horn can play most trumpet lines but has much of the warmth and resonance we associate with concert French horns.

The YHR-302M has a powerful sound projection and is ergonomically designed to be played during complicated marching maneuvers. It will fill in the brass section’s midrange well but can soar for the high notes. First introduced in 1937, the C.G. Conn 8D “CONNstellation” remains one of the world’s most popular French horns. If you listen to a lot of French horn music (and if you’re hoping to improve your playing, you should!), many of the hornists on your playlist are using Conn 8Ds.

While it is sturdy enough to serve as a beginning or intermediate instrument, the Conn 8D is the horn of choice for many professional players. It will not be out of place in an orchestra pit or recording studio.

At nearly $5,000, the Conn 8D carries a hefty price tag. But if you’re looking for the best French horn you can buy, the Conn 8D is one of the best in the world! While the Conn 8D is the instrument of choice for many American horn players, in Europe, the most popular professional horn is the Alexander 103, affectionately known as the Alex 103.

The Alex 103’s smallish bell, unique wrap, and larger bore give it a bright, penetrating sound that rises above the clamor in loud Romantic symphonies and choral numbers.

Because it is aimed at the professional market, the Alex 103 offers musicians several options. Buyers can choose between a fixed or detachable bell, between gold brass and yellow brass, and between mechanical and string valve options.

(Be advised that some of these options can add even more numbers to the already steep $8,500+ cost of a base model.

Because Alexander horns are entirely made by hand, many musicians report considerable variability in the tone and timbre of different Alexander horns. If you are interested in buying an Alex 103, you may want to try a few out at shops before settling on the one that best suits you. If you have the skill to handle the extra valve and the strength to hold a larger and bulkier horn, the Paxman 75.3 will help you reach sonic heights you never thought possible.

Paxman’s patented Mereweather system uses different bores for each set of tubing. This ensures a steady resistance as the musician switches valves and helps the hornist keep a consistent tone across registers.

A Paxman 75.3 will set you back well over $18,000. Unless you are a very experienced player, a triple horn will soon have you throwing up your hands in frustration. This is a professional instrument best suited for professional players. The Conn 8D CONNstellation will be the best choice for most French horn players. The Conn 8D is durable enough for touring, performance, or young performers.

And while it is a big initial outlay, a student who starts on a Conn 8D and keeps it properly maintained can play that horn as a primary instrument for the rest of their career.

Answer: French horn music frequently makes use of the horn’s higher registers. In higher registers, the spaces between notes become more narrow, making it easier to slip and hit a sour note.
This means a French horn player needs a tight embouchure and excellent control of the puckering muscles. While “good kisser” is a matter of personal taste, French hornists certainly get extensive practice in all the right kissing skills.

Question: Where Does the French Horn Come From?

Answer: Despite the name, the French horn originated in Germany. In 1818 German instrument makers Heinrich Stölzel and Friedrich Blümel patented the first valved horn using rotary valves.
In 1900 another German instrument maker, Fritz Kruspe, created the double F/B♭ horn most commonly used today. Outside the United States and Canada, the French horn is commonly referred to simply as a “horn.”

Question: Why is the French Horn so Hard to Play?

Answer: While most brass instrument music starts in the second harmonic series (the instrument’s second octave), music for the French horn more typically begins at the third harmonic series.
The space between notes becomes more narrow with each octave, making it easier to hit a sour note. Double and triple French horns require the hornist to learn new fingerings and to play them from muscle memory during a performance.

For players on a tight budget, used French horns are available at many instrument stores and online for very reasonable prices. While you can find classic vintage instruments for less than the cost of a new horn, French horn repairs can be expensive.

A bargain horn that needs “just a little bit of work” may wind up costing you several times the original cost in repair bills. I recommend buying used French horns in person or through an online retailer with lots of positive feedback and a good returns policy.